Click HERE to Listen - On this week's episode of the Putting Couch we talk once again with one of the world's leading putting instructors, Pat O'Brien.  In Episode 19 of The Putting Couch Podcast, O'Brien dives into the third and fourth of his 4 KEY putting fundamentals - POSTURE and BALL POSITION.

We covered the GRIP in Episode 10 and ALIGNMENT in Episode 14. O’Brien – has been teaching putting and the SeeMore System around the world for more than 20 years, ever since he watched his good friend the late Payne Stewart first benefit from the SeeMore FGP putter and SeeMore putting system to win 1999 US Open and lead the PGA Tour in putting statistics that year.

O’Brien is most well known as the long time putting instructor to Zach Johnson, who has used his SeeMore milled FGP to win 2 Majors, 12 PGA Tour victories, and over $45 million in career earnings. But O'Brien is a teacher and friend to players of all skill levels and you’ll love getting to know him as a regular contributor to “The Putting Couch” podcast! O'Brien is the Director of Instruction at Lakewood Country Club in Dallas, TX and is SeeMore Putter Company's Global Ambassador.  For more information on O'Brien visit Pat O'Brien On Golf.

SeeMore Putting System That Helps Win MAJORS WILL Work For You (@patobriengolf) - Watch Below.

Will the same putting system that has helped win Major championships work for the average golfer? Listen to SeeMore Ambassador, @patobriengolf, talk how it can work for every golfer (1min video). 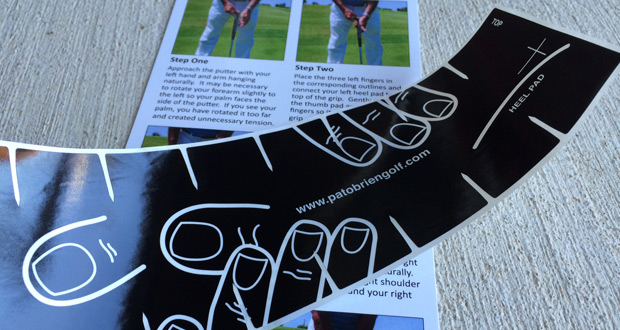 Pat O’Brien almost needs no introduction on PutterZone, as we have been a fan of his here since the launch of the site seven years ago. Pat is a noted putting instructor to major champions such as Zach Johnson and many others. He is a longtime ambassador for SeeMore putters. He is a teaching professional at Lakewood Country Club in Dallas. He was a close friend of the late, great Payne Stewart. He was also kind enough to serve as a technical adviser to our putting fitting book, Putter Perfection.

As if that’s not enough, Pat has now launched a new product designed to help you get a better grip on your putter. The Perfect Putting Grip ($19.99) is a label that you place onto your putter grip, showing you exactly where to place your fingers to achieve what Pat calls the “modern putting grip.” The label fits any size of grip. It is durable, yet easily removable once you feel you’ve mastered the grip. You also get a second label for when you need a refresher, as well as reference card showing you how to apply and use the label. An included QR code provides access to reference videos. Following is our exclusive interview with Pat O’Brien about the Perfect Putting Grip:

You are a proponent of what you call the “modern putting grip.” How does the modern grip differ from the traditional grip, and what makes it better?

Back in the day, so to speak, greens were grainy, slow and bumpy. They were common Bermuda grass. The style was to employ a wristy or pop stroke to get the ball rolling. In 1981, Augusta National switched to bent grass and that ushered in an agronomical revolution. Greens could now be faster and smoother. There are now several hybrid strains of Bermuda that achieve the same effect as bent but are more heat tolerant. So the style of putting has changed. Most good putters now are swingers and not hitters.

The easiest way to be a swinger is to free up your wrist joints, so the weight of the putter head can swing up on the way back and naturally fall down on the way through. A putter is essentially a weight on a stick, so this is how it is designed to swing. Since your heel pad has the leverage, the thumb pad can stay relaxed. The thumb pad is connected to the wrist joint, so it remains free. This is a biomechanically correct grip.

Below is a great video of Pat O'Brien explaining in simple terms a putter fitting with the crew from The Hackers Paradise.

During the 2014 PGA Merchandise Show - The Hackers Paradise caught up with Pat O'Brien at the SeeMore Putter Company booth to talk about the putting grip.  Great video below. 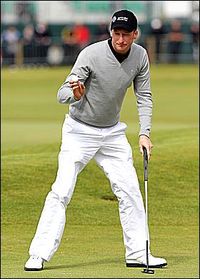 Steven Tiley arrived on the radar of world golf when he shot a 66 in the first round of The 139th Open Championship at St Andrews, and the Englishman will continue his Major love affair at Muirfield next week hoping for more success.

The 30 year old has become something of an Open qualifying specialist, succeeding three of the last four times he has attempted to play in golf’s oldest Major, the latest of which came when he won Local Final Qualifying by three shots at Musselburgh earlier this month.

Tiley is in fine form heading into the season’s third Major, carding rounds of 68 and 65 on the first two days of the Swiss Challenge to lie two shots off the lead at the halfway stage.

“Everything’s good at the moment and I’m playing nicely,” said the Herne Bay resident. “It was nice to qualify again. I only missed by one shot in the only qualifier I haven’t made. That was annoying as it was for Royal St Georges in 2011, which is near where I live in Kent. That was the one I really wanted to play.

“I know I can do it, so I think that gives me extra confidence. It’s just a question of trying to play half-decent, and if you do you’ll be in with a sniff. It’s almost like a lottery. And if you don’t play well it’s not the end of the world. If you qualify it’s a bonus; there’s nothing resting on it.

“It’s a brilliant tournament so I’m really looking forward to getting up there. I’ve never played Muirfield, so I’ll be heading up on Monday morning with the family, and I’ve rented a house about a hundred yards from the course.

“I missed the cut by one in 2004 when I was an amateur, finished 68th in 2010 and missed the cut last year by one. I’ve played alright, but there’s not been anything outrageous. No Chris Woods yet.”

While it is surely a bonus for any player from golf’s second tier to compete in a Major Championship, Tiley realises a week away from Challenge Tour duties is not ideal for his ultimate goal.

“The target is obviously to get to The European Tour through the Challenge Tour Rankings,” he said. “So next week is not going to help that cause – not unless I finish in the top five and earn enough money through The Race to Dubai.

“It would be nice to have a good week here in Switzerland – not particularly for confidence or anything like that as it’s a completely different type of golf up there, but because next week I’ll be missing the Challenge Tour.

“Obviously it’s always good to get to play in The Open, but it’s not part of my schedule.”

Asked who would comprise his dream three-ball for the first two rounds, Tiley replied: “Tiger and Rory. Or any of the top guys really. That would be great.”

Here are some great stats of Z vs. field in the 2007 Masters.  He dominated the field.  Yet his Master's score is an asterisk as highest winning total at Masters.  So I compared same exact comparative stats in 2010 Colonial, where his winning score also dominated field and in this case was the all time low record for that event.

But his Masters final round of 69 was 6.5 shots better than the field for the week!  That final round 69 at the Masters must go down as one of the great final rounds to win the Masters in History!!!!!  27 Putts in final round (a chip in birdie on 8 and 5 putting birdies).  On maybe the toughest greens ever at Augusta.

Below are some great stats....